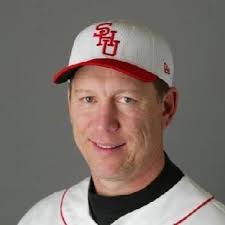 Coach Giaquinto, former Head Coach of northeast power Division I Sacred Heart University (30 yrs).  The Pioneers have reached the Northeast Conference championship game 7 years in a row and have won their conference title 4 times and advanced to the NCAA Division I regional tournament.  Giaquinto has garnered many coaching accolades during his tenure at Sacred Heart including Coach of the Year Honors multiple times.  He has had numerous Sacred Heart players drafted into professional baseball during his coaching career as well.  As a player, Nick actually played in the NFL for four years from 1980-83 for the Miami Dolphins and Washington Redskins and won a Super Bowl with the Redskins in 1983.