Outer Banks Daredevils would not relinquish the lead as Greenbrier Knights was unable to weather a two-run fifth inning deficit.

Dougherty boosted his batting average thanks to a perfect 4-4 day at the plate to pace Outer Banks Daredevils. He singled in the first, third, sixth, and eighth innings.

Kieran Conway ended up on the wrong side of the pitching decision, charged with the loss. He lasted just one-third of an inning, walked two, struck out none, and allowed three runs.

Outer Banks Daredevils didn’t give up the lead after the fifth inning. Additional runs came from an RBI single by Rosales.

The 2015 season of the Tidewater Collegiate Summer League is finally here and we are excited to have the boys of summer back on the ballfield for another season of exciting collegiate summer baseball. The teams rosters are all posted along with the schedule, and opening night is June 1st. Please come out and support your team while enjoying great summer collegiate baseball. 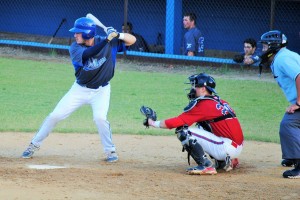