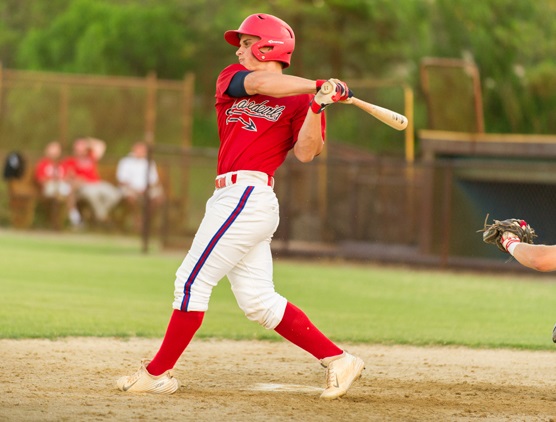 Jay Golliday‘s (Campbell Univ) lead off triple to start the ninth inning in an 8 – 8 deadlock set up Brian Remaley‘s (Anne Arundel CC) walk off single to right field, giving the  Outer Banks Daredevils a 9-8 victory over the Norfolk Bluefish at TowneBank OBX Park on Monday Night. The two teams combined for 17 runs and 19 hits, including six extra base hits. Jay Golliday was the Player of the Game with his three hit, 4 RBI performance.

Eamonn Collins (Tusculum College) got the win in relief for the Outer Banks Daredevils. Collins pitched six innings and allowed only 1 earned run, and starter Bailey Lipscomb (Chowan Univ) pitched 3 innings, giving up the mound in a 4 -4 tie game in the 4th inning.

Jake Thompson  (William Jessup) took the loss for Norfolk Bluefish, despite his 4 1/3 innings of work, walking one, striking out five, and allowing only two runs. Eric Baumgart (Baldwin Wallace) got the start for the Bluefish, going 3 and 2/3 innings,  with 4 H, 8 BB, 3 K, and 7 Runs, all earned, but with great support from his offense, still held an 8 – 7 lead.

The Norfolk Bluefish jumped out to an early 1-0 lead in the top of the first. The Norfolk Bluefish attack began with a led off double from TJ Wardwell (Mt. Aloysius College), eventually scoring the first run of the game on a fielders choice by Jay Bowman (Fort Hays St. Univ). Calvin Holland (St. Michaels) was 3 – 4 at the plate and Matthew Koskinen (Baldwin Wallace) went 2 – 5 with a pair of RBI to help power the Bluefish offense.

The Outer Banks Daredevils scored three runs of its own in the first. scoring on a groundout by Chris Childress (Urbanna Univ) and a two-run single by Jay Golliday (Campbell Univ). Along with Golliday’s 3 – 4, 4 RBI performance, the Daredevils offensive attack included Ryan Creps (Cansius College) 2 – 4 night at the plate, scoring a pair of runs, and a total team contribution as 8 of the 9 batters getting hits and the other drawing 3 walks and scoring 2 runs, including Remaley’s walk off.