The Suffolk Voyagers Baseball Club is excited to announce the signing of Matt Young to serve as their head coach for the upcoming 2019 summer season, along with Associate Head Coach Nick Galenti and Assistant Coach Scott Courturier. The Voyagers and the Tidewater Collegiate Summer Baseball League welcome Coach Young, Coach Galenti and Coach Courturier to our organization. 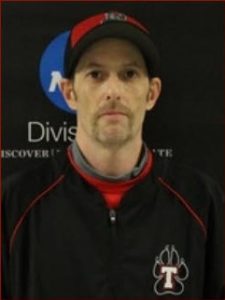 Matt Young is in his 6th year of coaching. He is currently coaching at Thomas College in Waterville, ME where he serves as an Assistant Coach working mostly with hitters and middle  infielders, while also recruiting. Coach Young spent last summers season as the Assistant Coach of the Carolina Forest Crawdads of the BCBL in Myrtle Beach, SC. Previously Matt was at Messalonskee High School in Oakland, ME At Messalonskee Matt coached the catchers, hitters and infielders. Matt also coached both the junior and senior legion summer programs being named the Norths Division All Star Team Head Coach in both the 2017 and 2018 seasons during his tenure at MHS. Coach Young is a 2018/2019 participant at the invitation only Major League Baseball Scouting Development Program. Matt owns and operates Play Ball, a 12,000 sq. foot indoor baseball and softball training facility in Vasselboro, ME. This is his first year coaching in the Tidewater Summer Baseball League.

Coach Galenti enters his 4th season as an assistant coach and recruiting coordinator for Erie Community College in Buffalo, NY where he is the understudy of long-time coach Joe Bauth, who has amassed over 950 wins and is the active President of the NJCAA. Nick works with hitters, infielders, as well as catchers. Nick is also the recruiting coordinator and has seen each recruiting class get bigger every year since he started. Nick is also included in the process of helping the sophomores that play for ECC search for potential 4 year schools to play at after they graduate at Erie CC. In his playing day, Nick played at Erie CC for two years. He then went on to play at NAIA Central Methodist University where he won a Gold Glove playing 2B and led the conference in double plays and fielding percentage.

Scott Couturier joined the United States Marine Corp directly upon graduating from Messalonskee High School in Oakland, ME. Serving from 1988 to 1993 and is a Gulf War Veteran. Scott has served on Coach Young’s staff for the past couple of summer seasons starting in 2017 as a bench coach. Coach Couturier took on the role as both the pitching coach and bench coach in 2018 for Carolina Forest Crawdads of the Beach Collegiate Baseball League in Myrtle Beach, SC. Coach Couturier volunteers time at a local gym working with high school and college baseball players with baseball specific strength and conditioning both off season and in season. Coach Couturier is also a certified power lifting judge. This is his first year coaching in the Tidewater Summer Baseball League.